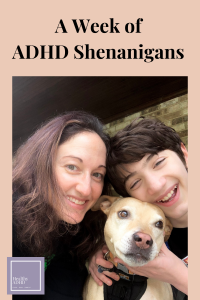 I’ve had many requests for another day-in-the-life article, but I decided instead to give you a week of ADHD shenanigans instead. My son was little when I wrote that.

These days everyone shares every moment of their ADHD lives on social media. But I feel more comfortable writing it down than pointing at word bubbles.

This particular week was ADHD personified.

With school ending, me attending a class, and mercury in retrograde the month of May was innnnersting.

During step-up night my friend Heather and I were talking about how we had been at school events every single night that week.

I mentioned the 6th grade social Friday night and asked if she wanted to go out while the boys were there.

She told me she’d promised her son Mexican for dinner after.

This is where my ADHD showed up. —My brain was thinking about Friday night, whereas Heather was talking about that night. (Thursday)

“I’ll ask Elliott if he wants to go out for Mexican.”

We then took a long, hot, loud tour of the middle school that included pictures with an emotional support dog.

On the way out Heather said, “so we will see you then.”

I thought she meant she would see me Friday night.

Heather took her son to the Mexican place and thought we’d be following. We didn’t.

We had a good laugh about it and rescheduled.

Was supposed to volunteer for field day at school. They cancelled and postponed til the next week.

I messaged my trainer to ask if my 9am spot was still open. She put me in at 11am. I didn’t have a snack before I worked out so I got light-headed while doing burpees. Not my best workout.

Spent the afternoon doing paperwork for my class. Somehow failed to save some changes I’d made before closing a document and had to recreate the whole thing. I very much wanted to throw my laptop but controlled the impulse.

Dropped off the child at his first middle school social and watched for a few minutes.

Sixth grade girls are much more into socializing than boys. The boys ate shaved iced and chased each other around while comparing farts. (I heard them)

Went out for Mexican food for real with Heather and her son. So the day ended well and we got learn about the correlation between Mexican food and fart smell.

Drove to Baltimore for a Jujitsu tournament. Was heartened to see protestors. I’ve been feeling down about SCOTUS and the whole idea that women will soon have no bodily autonomy at all.

Elliott was getting a headache from the lighting and too many people so we headed home around 12:30pm. Stopped and ate at a Carraba’s. Had a surprisingly good salad with burrata cheese.

Later in the day I tried to boil eggs. In my brain I’d decided this was relatively quick so I only boiled them for about five minutes. As you can imagine the eggs were not cooked and I made a giant mess and wasted a dozen eggs.

Then I drank a berry sour beer because I felt that I deserved it.

Did a short, sweaty run in the morning. Realized a couple miles in that I shouldn’t drink the day before a run. No matter how many times I make this mistake it never sticks.

Sent out my classwork for review and decided I wanted to go buy hanging plants and ferns for my balcony. I knew I wouldn’t have time to do all my flowers, but thought I could start with this and go back for the rest in a couple weeks.

I purchased a huge hanging basket, and a fern. As I was unloading the car I looked down and noticed that I had gone to the plant farm in my slippers. These slippers. And NO I don’t get a summer pedicure. I must’ve looked odd wearing sweaty gym socks and slippers with dogs on them.

First client cut our meeting short because she double booked me.

Second client forgot we had a standing appointment.

Then my friend called and said she was walking her eight pound dog, got tangled in the leash and fell down breaking her nose. I looked at the pics she sent me horrified and wondering if she should have seen a plastic surgeon in the ER.

At this point I asked my friends in the Enclave WTH was going on.

Turns out mercury was in retrograde, and it was a blood moon.

Naturally, I spent about an hour reading about the blood moon and forgot I was supposed to go over to see my neighbor’s newly renovated house.

I arrived late, enjoyed talking to the moms who live around me, but have no clue what anyone’s name was.

Woke up early. There’s a woodpecker somewhere around my house and the sound really bothers me. In general the birds get on my nerves, making nests in my plants and whatnot.

While drinking my coffee I ordered an owl to put on the balcony to scare the birds. And some tacky silver tape to tie on the railing.

Met with a client, had a great session. Then gathered a bunch of paperwork for my class. Decided not to over prepare because it makes me panicky.

Called my grandfather to discuss the news of the day. He always has good stories to tell. Life at the Country Meadows is not as mundane as you’d expect.

While we were talking he couldn’t find the remote and his television was LOUD.

After we got off the phone he called me back to tell me he found the remote in his shirt pocket. He said he put it there so he wouldn’t lose it. 🙂 The best part of this is that I’m 99% sure the ADHD stuff in our family did not come from his side.

He is 93, so he’s still doing better than most.

Took the dog for a short walk and said hello to a neighborhood mom I’d just met the other day. Already couldn’t remember her name but also didn’t need to use it. Went straight home to take a run.

Got myself geared up to coach in front of others for class and then didn’t have to do it. I actually don’t like speaking in front of others at all, so live coaching is a difficult thing for me. Coach training has challenged me in every which way, but that’s a story for another day.

Spent the last hour or so before my son got home to get my class paperwork ready for the next day’s recording.

Told my husband to grill hamburgers for dinner. Except I hadn’t gotten any burgers, so he graciously went to buy burgers and buns and all the supplies. After all these years I still have no interest in cooking and even planning has pretty much gone out the window.

That is a week of ADHD shenanigans in my house.

Not every week is that busy.

I don’t generally have so many school events all at once but it was the end of the school year.

Over time I’ve started to appreciate the humor that is my life with ADHD. But I don’t want to downplay how debilitating brain-based challenges can be.

Apologies for the length. I’m not a brand, I’m a person. When I share it’s because I want to normalize the day-to-day stuff for other women and mothers.