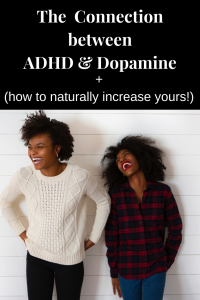 I’ve long been curious about the ADHD and dopamine connection.

Dopamine has been getting a ton of press lately. And while I’m glad that ADHD is also getting some much-needed attention, I still don’t quite understand the connection between the two.

Check out all the articles on psychology today.

Sometimes dopamine is demonized as the primary culprit in addiction.

Other times dopamine is described as the “pleasure chemical”, and the answer to our prayers.

In reality, dopamine is just a neurotransmitter, a chemical, that we all have in our brains.

Think of neurotransmitters as chemical bridges that connect different regions of our brain. These vital chemical messengers allow the neurons to fire and connect with each other.

Neurotransmitters are definitely important, as our brains would not work without them.

Dopamine is a precursor to norepinephrine which has been found to be low in patients with ADHD.

Without a supply of dopamine and norepinephrine, certain regions of the brain will not communicate properly, and you see more ADHD and Executive Function issues.  Source

ADHDers are low on norepinephrine and dopamine so we don’t get some of the benefits such as:

I was explaining that I am basically only productive when I work out, or when I drink enough coffee to get me going. My psychiatrist felt that I was self-medicating with caffeine.

I had never made the connection before despite my crazy-high caffeine consumption.

Together we decided that I would trial Concerta again, since I hadn’t tried it since college. Low and behold I stopped drinking so much coffee, and my motivation drastically improved.

If we’re being honest my mood was better, too.

But what about people who cannot tolerate stimulant medications? How can we maximize dopamine naturally?

The 5 most effective ways to maximize your dopamine

Yes, you can increase your dopamine naturally. And since ADHD and dopamine are so interrelated this is important info for some of you.

I have written about this before. Because it’s true.

Getting up off my butt is not easy, but I now consider it part of my health care. In fact, I pay a trainer because having that level accountability is what I need to show up for myself.

It is expensive, but cheaper than diabetes or heart disease.

Now, if you have ADHD you probably won’t get a huge boost in dopamine after you exercise. But you might just get enough for you to go home and “feel” productive.

Feeling good is half the battle.

This is a little trick I learned from my trainer.

I drink this stuff a few times per week when I work out. (affiliate link. Please see my disclosure.)

They taste pretty good so you will get your water, plus you will feel generally good.

At first I thought it was my imagination, but after reading Answers to Binge Eating, by James Greenblatt, MD, I found out about how amino acids, and L-tyrosine in particular, help with dopamine. (another affiliate link.)

Ever noticed that when you listen to music while you drive the time goes faster?

Even when you do something totally mundane like folding laundry, music can help you to stay motivated and complete the task.

Personally, I have never done well in complete quiet. I need background noise but I am picky about what it is.

Music is preferable, but I can also get into a podcast.

As it turns out, music is good for my brain!

If you really want to optimize your results, listen to music you like. Not just any music.

The more you enjoy the music, the more dopamine you will produce. Source

Here is another article from Wired on the Neuroscience of Music.  Very interesting stuff.

Try it, you have nothing to lose.

Create a Challenge for yourself

Transitions are tough for we with ADHD. Even small transitions like moving from family time to getting ready for bed can cause major battles.

I discovered a long time ago that if I turn it into a competition, my son and I have an easier time with the transition.

Last night we had a crab walk race down the hall. It was not easy on the joints, but it did make us both laugh.  Laughing is good for dopamine!

The next time you are having trouble getting started with a work project, create a challenge for yourself. Or create some kind of competition with your coworkers.

Do something that makes you laugh or creates a sense of challenge to engage your brain.

I have been a fan of fish oil for quite a while. But now that I know a little more I am hooked.

One study found that fish oil administered to rats increased dopamine production up to 40%.

Along with fish oil, I suggest trying to maintain a fairly healthy diet.

Sugar is like a drug for some of us. I have a love/hate relationship with the stuff.

When we ingest sugar, or even caffeine, we get a quick hit of dopamine. But truly, most of that hit is our brain anticipating the reward.

After about 15 minutes most of us will feel like crap again.

And if you have had a bunch of caffeine, you might feel jittery and irritable.

In short, watch your sugar intake and your caffeine.

Try a multivitamin to make sure you are getting all the nutrients you need.  But don’t go crazy buying 100 different supplements.

Here is a link to my article on binge eating and ADHD.

The bottom line:   Talk to your doctor. Take your medications as prescribed.

And learn about the 5 most effective ways to maximize your dopamine.

Life with ADHD is much like trying to hold corks underwater.  When you focus on one aspect of your functioning, something else might pop up.

As I always say – everyone has issues, sometimes you just need to laugh. You’ll get more dopamine that way!

Join the Enclave – we keep each other laughing while creating calmer, more satisfying lives with ADHD.