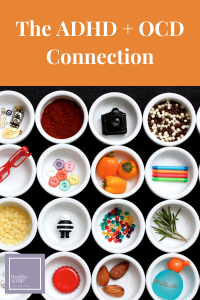 If this is a topic that is upsetting to you, feel free to click away.

The ADHD – OCD connection is often overlooked. Which sucks because it’s a conversation we need to be having.

We talk about ADHD using words like, “control” or even, “manage.”  This happens because most of us do want more CONTROL over our lives, even if we aren’t sure what that means.

When you feel like you aren’t in control of your own brain, it makes sense that you might search for things you can control.

When I was eleven my stepfather died unexpectedly, and my mother was thrust into single parenthood.  During this transition my brother and I were both diagnosed with ADHD. See my story here.

After one incident involving a teenage babysitter, a flooded bathroom, and my brother being chased naked by said babysitter, my mother hired a middle-aged woman named Mrs. Taylor to babysit us.

One evening after my brother had gone to sleep Mrs. Taylor told me that she wouldn’t be enjoying a snack with me because she was on a low-fat diet. She explained that she had lost weight eating only 20g of fat or less per day.

The idea of losing weight appealed to me because I was eleven and girls that age are very aware of their bodies. So I started counting fat grams. In fact, I began picking the cheese off of sandwiches, or scraping the peanut butter off of the bread in the middle school cafeteria.

I liked the sense of control it gave me.

Food and weight was something I could control. The rest of my life, including my mental health management, was decided by adults.

Besides, I was the only girl in my school taking Ritalin, so I was NOT going to be fat on top of that humiliation.

Thus began a lifelong obsession with food that has continued off and on for years.

In my mid-20s I became aware that my eating behaviors, and the mental gymnastics of obsessive calorie counting, were actually a form of disordered eating.

Researchers are starting to make the connection between ADHD and OCD behaviors – which can include things like compulsions and rituals that satisfy our need for control.

The DSM breaks OCD down into obsessional thoughts and compulsive acts, or rituals. Source

Obsessional thoughts are repeated images, urges, or thought patterns that are intrusive and cause someone anxiety or some other emotional distress.

Whenever I’m in proximity to food my mind goes immediately to the parts of my body that I hate. I know it’s not normal, but I can’t seem to stop. This is a great example of obsessional thoughts.

Compulsive behaviors are the repetitive activities that someone with OCD feels compelled to perform as a result of the obsessional thoughts.

Logging onto my fitness pal to log everything I eat is the most obvious compulsive behavior in my life.

I’ve been suspicious about the relationship between ADHD, anxiety, and OCD for some time.  But I had no idea where to find info on it.

I participate in the Annual International Conference on ADHD every year.

A few years ago there was a presentation on OCD and ADHD by Dr. Roberto Olivardia and Dr. William Dodson.

Soooo yeah. That title definitely describes me. And perhaps some of you.

According to the presentation slides Anxiety impacts ADHD by decreasing our attention, decreasing concentration, making it harder to use helping strategies, interferes with EFs, and sometimes it actually mitigates hyperactivity.

Overthinking is my exercise of choice.

Here is where things get really scary.

If there is already a problem with self-regulation (ADHD)- OCD can produce any of the following additional symptoms:

According to Dr. Olivardia, “OCD can be diagnosed if someone has either obsessions or compulsions, or both. Stereotypes about the condition abound, but the reality is complex and nuanced. Since obsessions and compulsions can take on any form — and OCD varies widely in severity — diagnosis can be difficult, and usually requires a therapist specially trained in the condition.” Source

YAY. No but really. I see a lot of myself in this presentation.

Bulleted information is better absorbed by your brain, so:

What does all of this mean?

YES, you can have ADHD and Anxiety and OCD at the same time. Dr. Olivardia and Dr. Dodson have seen it and are looking into it.  Thank goodness someone is!

Now that I’ve gone through the information in this presentation, I plan to speak to my psychiatrist about this.

Ask your provider about the ADHD – OCD connection if the symptoms listed in this article feel familiar to you.

Remember – it’s natural for you to seek some sense of control over your life. But life with ADHD isn’t about controlling  symptoms. It’s more about figuring out what supports and strategies work for you and then applying them.

The most effective tool I’ve found to deal with the ups-n-downs of ADHD life is a community of women.

Join the Enclave and build a calmer, more satisfying life!