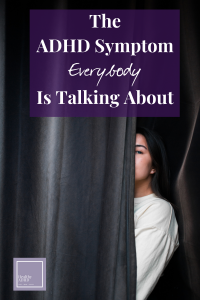 I changed the name of this article to the ADHD symptom everyone is talking about.

Mostly because in the two years since I first wrote it, there has been a huge increase in awareness about rejection sensitive dysphoria.

“The role of emotional management in adults with ADHD is something the DSM IV criteria don’t touch, but those of us who deal with adults with ADHD repeatedly encounter patients who have difficulty managing their emotions.”  -Dr. Thomas Brown, in Smart But Stuck

In my 20’s I found a really good therapist.

I remember talking to him about my childhood and my adolescence. We discussed my ADHD issues quite a bit in the context of me wanting to improve my relationships with both myself and others.

One particular conversation still stands out in my mind:

I had joined a new gym, and I mentioned that although the instructors were very nice, there were other women in the class that bothered me.

He asked, “What about these women bothers you so much?”

Thinking about the question, I answered him, “I feel like they are watching me. Or judging me or something. They are skinny, athletic types.”

As soon as I said it, I knew it was going to bite me in the butt – he was going to want to know WHY I thought that. And he did.

I told him that whenever someone was looking at me I assume I am being judged, and most likely in a negative way.

Together we did a great job unpacking some of my childhood traumas and my personal issues. But this was the one issue my therapy never was never able to resolve.

It was certainly not his fault. Much of what I learned from him I still practice.

Despite my therapist’s efforts to discuss the issue it is a problem that persists in my life to this day.

I am living with Rejection Sensitive Dysphoria

The ADHD Symptom everybody is talking about

What is Rejection sensitive dysphoria?

Dr. William Dodson first coined the term in the early 90’s.  He described RSD in the following way: (taken from his website)

“A constant vulnerability to being wounded by anyone at any moment that continues to throw them (his patients) into a tailspin without warning and then disrupt their lives for days with obsessive worry.”

So the next time you feel rejected or hurt, and you spend 48 hours in your home without emerging – you are probably experiencing Rejection Sensitive Dysphoria.

RSD is the feeling of being rejected or criticized that those of us with ADHD so often feel.

Ever heard the expression, “when you assume you make an ass out of u and me?”

That’s actually at play here. Not that it hurts any less.

Ochoa describes it as, “A chronic state of emotional stress directly related to the struggle to live life with ADHD, a stress that breaks down emotional tolerance, stamina, and the ability to maintain a strong sense of wellbeing.”

In his book, Mr. Ochoa is bringing to light something that Dr. Dodson noticed years ago.

You and I go through life in anticipation of being rejected.

Since we grew up with ADHD we were subject to a lot of criticism, correction, and rejection from peers and adults.

RSD can manifest in a couple different ways, depending upon the person.

Most people living with this condition fall into two different categories: internalizers or externalizers.

And frankly, we are often both at the same time!

Internalizers may fall into a major depression- locking themselves indoors or crying on the bathroom floor uncontrollably. In extreme cases, there can be suicidal ideation or dangerous self-medicating behavior.

The key factor indicating RSD, according to Dr. Dodson, “is that it is immediate and obviously triggered by some perceived rejection.”

Whereas with a major depressive disorder the symptoms occur more consistently over time.

Externalizers may display uncontrollable rage – firing off expletive laden diatribes at the nearest person. Or screaming and making verbal threats.

Fortunately for externalizers, their quick temper usually fizzles out as quickly as it began.

On the other hand, the people around them may grow weary of the outbursts and abandon the person, leading to more episodes.

Either way, your RSD will affect how you interact with other people and how you show up in the world.

How do you deal with RSD?

That is a tricky question, and one that I don’t have a great answer for.

Everybody is talking about it because it is painful, and it feels good to have a name for it. At the same time, this new knowledge and awareness forces you to delve into the not-so-pretty areas of your personality.

Living with, and dealing with, Rejection Sensitive Dysphoria requires a very high level of self-awareness and vulnerability.

You also need to be open to seeking help.

I am living with Rejection Sensitive Dysphoria. Maybe you are too?

As with all things related to ADHD, knowledge is power.

I highly recommend you use a journal to look for patterns in your thinking. Journaling is one of the only effective methods I have found to relieve constant the mental hum.

CHADD has a list of therapists and resources for ADHD. Don’t be afraid to seek a licensed professional as part of a multi-modal approach to treating your ADHD.

Personally, I think therapy is the best option for treating the emotional aspects of ADHD.

Meditation is another useful tool, and one which you can work on at your own pace.

Always remember, social support and being with other women who, “get it” is a powerful tool in your toolbox. And I’m NOT referring to huge Facebook groups.

Find a group of women who you can talk to in a secure environment, who have similar goals and struggles.

The ADHD Enclave is for ADHD women 30+ who are tired of information overload to learn, strategize, and make life calmer through a combination of live meetings and daily check-ins

For more info on Rejection Sensitive Dysphoria check out the following sources:

In need of some emotional support? Check out my one-on-one services.