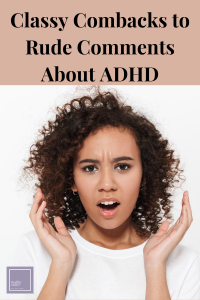 No matter where you turn, people are making rude comments about ADHD.

If you’re parent to a child with ADHD you’ve heard something along the lines of, “He just needs a whoopin.” Or better yet, “He needs a foot up his a$$!”

Perhaps your parents were given this advice about you! (I know mine were.)

The other day I was talking to an older woman and she was telling me about her granddaughter. Apparently, she is giving her parents some problems around curfews and house rules.

I’m one of those people who talk to strangers in the gym about their lives.

Somehow this woman knew that I worked with ADHD adults. Since we were socially distancing on the treadmills I was surprised she was so willing to shout out the details.

Anyway, I explained that my son has been a little sassy lately, but it’s much easier to communicate with kids when you are in control of yourself.

As she continued to tell me about her granddaughter sneaking out of the house during a pandemic, I deliberately sped up on the treadmill hoping that I could avoid the conversation if I started sweating more and grossing her out.

Can you guess her next words to me?

“Well maybe she just needs to be grounded and her phone taken away! I told my son if he had spanked her when she was little they wouldn’t be having these problems.”

I was not surprised.

I hear rude comments about ADHD nearly every day. The questions about ADHD are pretty rude as well.

There is so much misinformation and misunderstanding around ADHD.

It would be helpful to have some well-reasoned responses in our back pocket.

“ADHD is a brain disease right?”

Comeback: It’s not so much a disease as a difference in cognition. The way we absorb information and learn is a little different.  You cannot catch it like a virus.

ADHD is highly heritable. So if one family member has been diagnosed there are probably more.

“He just needs a whoopin!”

Comeback: Were you spanked/beaten as a child? There is a lot of medical research that says physical punishment doesn’t work. Parenting experts say that an Authoritative approach is the best for kids.

Can I practice on you?

“ADHD isn’t real. It was made up by the pharmaceutical industry.”

There is a pile of medical evidence for the neurodevelopmental differences in individuals with ADHD.

“ADHD is just an excuse.”

Comeback: An excuse for what? I wish it was. I wish I could turn it off, but it’s how my brain works.

What’s your excuse for being uninformed?

“Medication is a crutch. It doesn’t fix anything.”

Comeback: No. You’re right, medication doesn’t fix ADHD. The point of medications is not to fix anything, but to improve the quality of life.

Are your eyeglasses/contacts a crutch? What would happen if you didn’t use them?

“He is just throwing a fit to get what he wants.”

Comeback: Perhaps.  But meltdowns like this happen with ADHD children when they cannot organize and express their thoughts appropriately.

ADHD adults have a tough time regulating emotions as well.

“People with ADHD are just lazy.”

“You just don’t put forth the effort because you’re not motivated.”

Comeback: ADHD is not a character flaw. It’s a different in brain structure and chemistry and it is not a choice. I’m not feeling motivated to discuss this with you.

Comeback: Sometimes we say and do things impulsively. We might not pause before we act. Many adults and children without ADHD behave impulsively as well.

Not all of us are hyperactive. There are actually three distinct presentations for ADHD.

Comment: “He/She is hyper from all that sugar you let him eat.”

Comeback: Yes, hyperactivity can be exacerbated by too much sugar. Blood sugar regulation is actually really important for regulating arousal levels with ADHD.

But for some of us, hyperactivity would be present even if we ate no sugar at all.

This comment is usually followed with some type of unsolicited advice related to discipline and punishment.

Comeback: I have read all of the parenting books. ADHD cannot be “fixed” by trying different parenting strategies. You need more comprehensive treatment and parental support.

Comment: “I’d never let my kid get away with that!”

Comeback: Does your kid have ADHD?

Tell me what you would do and the results you would get.

Comeback:  I never outgrew it. Only about 30% of people do outgrow it.

Numerous studies have confirmed that early intervention is the best course of action for treating kids. Ignoring ADHD and hoping they grow out of it is more risky than treating it.

Comment: “Aren’t you afraid of what those drugs could do to your child?”

Comeback: Sometimes. But I’m more afraid of what will happen if I don’t treat it.

Statistically he’s at higher risk of dropping out of school and drug abuse if I don’t treat the ADHD.

Many adults with ADHD self-medicate with much more dangerous drugs.

Comeback: Nope. It’s not about being forgetful or distracted. ADHD exists over the lifespan and impacts every area of our lives. Including our self-worth.

You having an, “off day” is not the same thing.

Comment: “You are so smart. How could you be ADHD?”

Other versions of this = “You went to college, you can’t have ADHD?”

“Your child is gifted, he can’t have ADHD.”

Comeback: You’re such a nice person. How could you be so closed minded?

People with ADHD are not dumb. They have a neurochemical difference in their brains. The reason I don’t seem impaired is because  treat the condition.

I use all the tools at my disposal to help me feel good and manage my life.

The general public still doesn’t, “get it.”

The next time someone makes a rude comment, or asks a rude question, look at it as an opportunity to raise awareness.

We really are stronger, together.

Email me YOUR comebacks to rude comments about ADHD. I’d love to hear them!

Looking for other women who, GET IT?

I’m bringing together a brilliant group of ADHD women to revolutionize peer coaching. We are telling our stories, managing our emotions, and creating change in our lives.

Wanna support the cause without committing to live meetings?