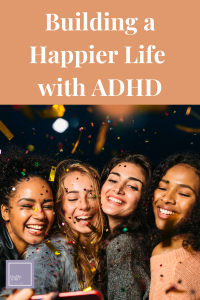 You might feel like the idea of a building happier life with ADHD seems out of reach. Sorta like the size four jeans I wore in high school.

The word happy is misunderstood in our culture. We think we should feel good all the time and never have any negative emotions or discomfort.

I’m skeptical that anyone, ADHD or not, ever feels totally happy and satisfied all the time, despite the myriad of advertising for products and services that would have us believe just that.

No coach, or pill, or program can make you happier. If someone tries to sell you on that, run the other direction.

Since starting my advocacy work I’ve had three major shifts in my thinking about ADHD women that I’d like to share.

The first shift is really about changing your relationship to the ADHD diagnosis.

You need to redefine what ADHD means, and what it doesn’t, in your life.

It’s easy to tell yourself that you aren’t capable of change, you’ve tried everything, and you are destined to a life of frustration and underachievement.

If you look around for evidence that you’re correct you’ll find it everywhere.

I would counter that perhaps it’s the way you think about yourself in relation to ADHD, as well as the patterns in your behavior that are actually the problem.

If you ignore the diagnosis and refuse help and support, you will continue to fail. But then it’s much harder to blame it on the ADHD.

You can cobble together a, “treatment plan” that consists of Facebook groups, marijuana, and Twitter because that’s the path of least resistance. In doing so you’ll reinforce the behavioral patterns you’ve been relying on for years – and your brain will be very comfortable not*** changing.

My point is this – you can choose to make the best of the diagnosis and remain open to change and growth. Or, you can live in learned helplessness and fight against the ADHD forever.

You just have to decide which path gets you closer to happy.

The second, and probably most difficult shift, is to begin to discern what helps you and what hurts you.

What helps v what hurts

Early in my re-education around ADHD, I joined a bunch of Facebook groups.

At first the intermittent reward of it had me glued to the screen. After a while I noticed it made me feel worse, which is the opposite of what a group should do. So I left all but two groups and haven’t looked back.

You may have developed some negative coping mechanisms that need to be evaluated.

Just because it seems like a good idea to eat the whole bundt cake and get it out of your house, doesn’t mean it’s actually a good idea.

You want ALL the cookies. Every variety of cookie appeals to you. But you eat them so fast you don’t taste them. Then you feel sad and unsatisfied because you didn’t enjoy them more.

But sometimes you overshoot and exhaust yourself and it looks like you dropped the ball.

You didn’t drop the ball you tried to do too many things. That’s actually an executive function deficit, not a character flaw.

Focus on building a toolbox of things that work for YOU. Don’t ask a bunch of strangers in a Facebook group to give personalized feedback.

If you find some tool or strategy that works, use it.

The third shift is much more personal.

You’ve got to learn how to take your LIFE seriously, but not take yourself seriously.

Here’s where I tell you a story.

As you know, I run a private membership community for women with ADHD.

For the last year I’ve given new members a free month before they have to pay. Everyone that comes to a live meeting is treated as if they are already a member of our core group.

We’ve had a few people come into our community, attend meetings regularly, and send me heart wrenching emails about how much they love the Enclave, and how it changed their lives. They always end with…but I can’t afford the payment.

Some of them outright asked me for a free membership. Kinda ballsy.

I felt very used. I’d invested in these people, and so had my other members. We’d peer coached these strangers through some very sticky situations.

I didn’t personalize it. I didn’t remind myself to, “charge my worth.”

I responded with humor and positivity. In fact, I directed one of them toward an ADHD-specialized doctor in their area who is widely regarded as an expert.

The next thing I did was set a boundary. I politely told them I wasn’t offering scholarships at this time.

…I removed the free month option from the Enclave.

My work in the world is creating services for ADHD women, and I take it very seriously. But I refuse to fall into the toxic positivity crap.

You have to know how to take your life seriously, while maintaining a sense of humor about yourself.

The three shifts I write about here can make your life with ADHD happier. Calmer.

Notice how I didn’t write perfect. I didn’t say these shifts would “fix” your ADHD.

I said these shifts helped me to feel happier in my life, and I want that for you, too.

I believe in ADHD women

Because I’ve known you forever. We are all interconnected.

Because I got in trouble for talking in school, too.

Because you and I are both space cadets.

Because I’ve made mistakes in my relationships, too.

Because I’ve impulsively said and done things I later regretted.

Because you expect more from life and feel sad when it feels like a drag.

Because you are capable of more, bigger, better, brighter.

Because of the countless nights you’ve stared at the ceiling unable to sleep wondering if you are doing enough.

Because you’re an amazing mother.

Because you’re an amazing friend.

Because if you don’t deserve to be happy, who does?

Building a happier, calmer life with ADHD won’t happen overnight. But it can happen.

Because we are stronger, together. 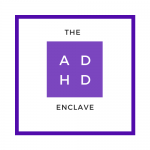