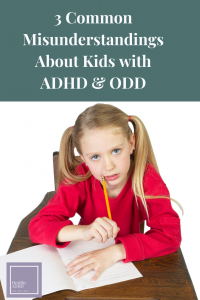 It is not uncommon to encounter kids with ADHD and ODD.

If we’re being honest, I know a ton of adults with ADHD who lean into oppositional behavior as well. Life with ADHD is frustrating, and frankly, we get tired of people trying to tell us what to do.

For much of my son’s life, I thought I was doing a lousy job as a parent. I also thought that I had given my child ADHD. (I did, but I don’t feel guilty about it anymore.)

Sometimes no matter how calm your voice is, or how carefully chosen your words, you still get mouthy, defiant responses.

Trust me, I know how hard it is.  And I also know how it makes you doubt yourself.

I don’t have a fool-proof solution, but I do have some information.

Oppositional Defiant Disorder is actually a descriptive diagnosis. Meaning it is diagnosed based on observable and reported behavior, as opposed to any specific psychodynamic process. This isn’t about neurochemicals.

ODD tends to develop alongside other diagnoses, it doesn’t just occur in isolation. And it is not simply the result of bad parenting or a lack of discipline.

Make no mistake ODD is hard for parents and caregivers to live with, so you have to be willing to work a little harder in order to manage it well.

Kids with ADHD and ODD

The Behavior is Personal

According to ADDitude magazine, many children are defiant by default. It’s an emotional reaction to stress that is strongly correlated with impulsivity.

When a child has a history of negative interactions with adults, their automatic response will be to push back.

Parents can unwittingly make the behavior worse if they often give in to tantrums and nagging in young children. In that case a behavioral therapist is a huge asset.

I ought help managing my son’s oppositional behavior starting when he was just four years old.

If you suspect your child has ODD, or he/she has already been diagnosed with ADHD you will want to talk to your psychiatrist or pediatrician. Unacknowledged ODD can easily start to leak into school and childcare situations.

Oppositional and defiant behavior is rarely personal. It’s not about you at all.

It’s about managing impulsivity and frustration around authority figures in general.

The behavior is intentional

There is no forethought involved with defiant behavior.

There is often a pattern of behavior, but a pattern is not the same as premeditation.

Most of the time children who have ODD also have ADHD, so their behavior is a reflection of their brain chemistry and executive function deficits.

It’s so easy to listen to your child and think to yourself, “he can control this.”

In the heat of the moment, the hurtful words and behavior FEEL so intentional.

But it’s not. If there is one thing I have figured out, it is that my son cannot control some of his most unpleasant behaviors. And often, he is ashamed of his behavior after the fact.

Shame is often displayed at anger. Think about that for a minute.

None of these behaviors are intentional.

I am absolutely not an expert in child/adolescent psychology.

But I do know that if you confront a young person with ODD they are going to come right back at you.

Confrontation can mean many different things, from verbal reprimand to outright punishment.

These are the typical punishments parents try:

None of these punishments work.

In fact, it might do more harm to your relationship down the road. Even if it works in temporarily.

Kids should not be told their behavior is appropriate when it is obviously not. But if you go all authoritarian parent on them, things will go downhill fast.

I consider myself authoritative, so I try to collaborate.

Things that do work:

-Parent Training. Check out my affiliate link to ImpactADHD, their services are amazing and affordable!

-Check out Anxious Toddlers. Natasha has two facebook groups, and parenting classes, too!

– Planned ignoring works wonders. Sometimes when my son is being particularly oppositional I will ignore him and leave the room. When he gets angry, I ignore it. He knows that I will not engage in battles with him.

-Choose your battles. Not every fight needs to be your Bunker Hill.

-Make sure your child feels heard. Tell him/her that you hear them and you are empathetic.

-Respect the feelings, do not belittle. You would be surprised how much emotional pain and anxiety is sometimes behind all the attitude.

More resources on children with ADHD and ODD:

Oppositional Defiant Disorder; What is it? via Child Mind Institute

ODD in Children via Johns Hopkins

Recommended Reading for parents of kids with ODD: (see my full disclosure)

Kids with ADHD and ODD are hard to parent.

There I said it! But that doesn’t mean we shouldn’t learn as much as we can.

I bring together brilliant ADHD women to manage our emotions, tell our stories, and create the changes that lead to calmer, more satisfying lives with ADHD.