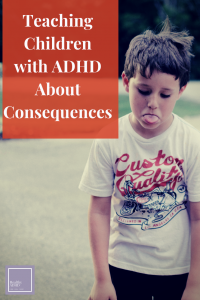 Teaching children with ADHD about consequences is tricky business.

As a parent with ADHD I have trouble recalling my past learning experiences and applying them, so I know damn well my child has is even harder.

According to the authors of Parenting with Love and Logic, consequences don’t have to happen immediately in order to be effective. (affiliate link, please see my full disclosure.)

“Consequences don’t have to be dole out on the spot to be effective. In fact, they are often most effective after a child thinks they have gotten away with inappropriate behavior.”  – Cline and Fay, Parenting with Love and Logic

For the longest time I thought that when my son was behaving inappropriately I had to take immediate action. Nip it in the butt and get it done.

Part of this was due to insecurity and part due to my own upbringing. When I stepped out of line there was a swift punishment for any infraction.

But recently, with the help of my son’s therapist I have been learning about ways to use delayed consequences. This is that it gives me time to think before I speak and act. And, it gives my son an opportunity to make a good decision. Teaching children with ADHD about consequences

Recently we attended a small outdoor (socially distant) gathering at the home of some friends.

All day E kept asking when we were going over to their house. When we actually arrived the two younger boys started to play immediately. At first everything was fine and everyone was enjoying themselves.

After a while my son stated, “I’m bored with this game,” and then he went to change his clothes so he could go swimming.

I was feeling a little embarrassed but I used what our therapist calls a firm but actionable statement.

“I would like us to stay and have fun, but if you use unkind words we will go home.”

We talked a little about why calling the other boy’s game boring was not kind and he agreed that he understood.

After lunch the kids went into the house while the adults stayed on the deck. We heard my son’s good friend say, “E—, stop it!” Hubby went inside, broke up the argument, and again told him to use kind words.

At this point we probably should have let the kids work it out on their own and ignored them. Apparently my son wanted to play a different video game than his host.

Personally, I would prefer the children work it out on their own so that E can learn through logical social consequences.

Thank goodness for my husband – he immediately flew into action grabbing E and enforcing our statement that we would leave. We calmly packed up – with our son screaming and stomping all the while – and then walked out the door after apologizing to our hosts.

I told E he needed to calm down and let me know when he was ready to have a conversation.

Later in the drive I asked him why he was being so pushy with his new friend and  he told me, “he asked me what I wanted to do, but then didn’t like what I told him.”

Me: So how do you think he felt when you called him boring?

E: Sad I guess – I’m sad too. Sometimes words just fly out of my mouth before I know what’s happening.

Me: So what do you think we should do?

E: Maybe I can call him when we get home and tell him sorry I acted that way.

Me: That sounds great bud, he’d really appreciate that.

E: Will you sit with me when I do it?

The consequence for his behavior was not leaving the party – it was the sad feeling he had when he realized what he had done.

E felt genuine remorse and was able to express it.

Punishments in the form of spanking or screaming actually cause more disconnection your relationship. And they don’t model the type of behavior we want. If your child sees you out of control, you are indirectly reinforcing the bad behavior.

Kids with ADHD have similar struggles. They want to engage with other children, and they want to form positive relationships, but there is always a barrier to seeing cause and effect.

Teaching children with ADHD about consequences is very much about allowing them to see and feel the power of their own words and actions.

Using delayed consequences and enforceable statements, you don’t see immediate results, but you do get a better sense of calm and confidence in your parenting. And you don’t feel guilty later for overreacting.

I bring together women and mothers with ADHD to manage our emotions, tell our stories, and create change, so that we can build more calm, satisfying lives with ADHD.