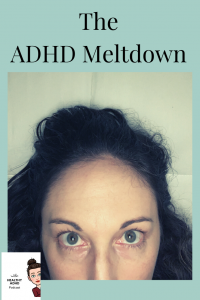 I had the ADHD meltdown of a lifetime a few weeks ago.

As you may know, one of the less-attractive symptoms of having ADHD is the emotional dysregulation.

Generally, meltdowns happen to me about 2 times per year and usually involve my family, my business, and not having my needs met for alone time. I am an introvert, so if I don’t get time to recharge it builds up until I explode.

My ADHD meltdown broken down into parts:

I had a conversation with a family member. I thought it went ok.

Apparently I misread the situation because I got several harassing emails from the person. Initially I didn’t think much of this because it is typical of the pattern of our relationship.

But some of the creepier comments wormed their way into my subconscious mind.

Since it happened on a Monday it set the tone for the rest of the week.

In typical Liz fashion, I felt my meds wearing off in the middle of my ADDA book discussion group. Dr. Michelle Frank was there and while she explained the section of the book we had chosen, I slipped into mind drama:

I love doing support groups. That is my whole business. But my mind was not in a good place that night, so I predicted failure before it even started.

By Thursday of that week I realized my energy was becoming very negative.

I didn’t have the motivation to do anything. No writing, no podcast.

I was showing up the Enclave, and that energy was helping me. But as soon as our meetings were over I was back to feeling like crap.

You know how sometimes you get so in your head you are going through the motions but none of it MEANS anything? The spark is just gone.

That’s where I was.

How I came back from the ADHD meltdown

I was feeling very reactive and disconnected from myself and my normal purpose.

First, I forced myself to brain dump. I’ve discussed journaling before, but this was more of a negative thought download. I needed to see it on paper and work backward in order to figure out where it started.

This process took me a couple hours, and it was not fun. You might want to do this in a word document if you aren’t someone who likes writing by hand.

As I worked backward, I began to ask myself questions both in my head and on paper.

Did I behave badly during that conversation?

Did I really do a bad job during the book discussion?

As you get further into your brain dump, questions will start to come up naturally. Use those questions to look at the facts. Often we think*** we screwed up, or the sky is falling and the reality is quite different from our perception.

As I got more clarity on what happened, and what didn’t, I was able to see things more clearly.

What you might notice as you work through your own meltdown is that at the heart of everything you are exhausted. Overwhelmed with life. ADHD has a way of making us feel that way.

I’ve said this before and I’ll say it again. We with ADHD need to know when it’s time to rest.

Not just sleep, but actually take a brain break.

Remove some of the pressure you put on yourself and just relax in whatever form works for you. Reading, trash tv, working out.

Sometimes we think we don’t deserve to relax. We have to work twice as hard as everyone else so we can prove we are productive.

The ADHD Meltdown will happen. It’s not IF so much as WHEN.

Just know there is a light at the end of the tunnel, you are not in this alone.

Just for fun I will leave you with this.  Regina George!
http://

4 comments on “The ADHD Meltdown”