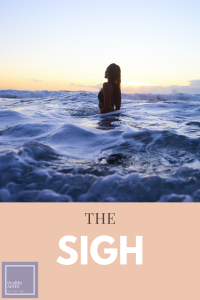 You know the sound of the sigh. Like the wind through the trees. It has an energy. It’s the sound of irritation, frustration, judgment.

The sigh isn’t just about ADHD, it’s more personal than that.

It’s the sound of my not enoughness for the people around me. The sound my teachers made, my parents made, ex boyfriends.

What if I’m asking for too much attention?

What if I’m annoying?

What if nobody wants me around?

My twelve year-old brain thinking maybe I should stop asking. Stop drawing attention to myself.

Maybe I should be quiet and shrink.

Shrink in size, shrink in presence, blend into the walls.

I shrunk my physical body for 30 years thinking I’d annoy people less if I were smaller.

I shrunk my voice for just as long, hoping that if I seemed, “nice” or “charming” people wouldn’t sigh when they looked at me.

I shrunk my life. I did less, tried less, I experienced less, because it seemed much safer not to put myself out there.

That shit did NOT work.

So – I’m over forty and no longer willing to be a shrinky dink.

If you’re reading this, I’m going to assume you’ve heard the sighs, too.

What do you do when you’ve lived your whole life trying to be smaller, and all of a sudden every part of your being wants to expand?

You have a few options.

Who knew that “cancel culture” would become a buzzword with the GOP?  I’d always thought it was just a social media thing.

You might have thoughts of cutting all the people out of your life that made you feel shrinky.  Or sighed loudly whenever you opened your mouth.

Dr. Michelle Frank once told me that ADHD women either think we are, “too much or not enough.”

Sometimes a clean break is a good option.  If someone has directly informed you that you’re not enough, there’s no point in sticking around. They won’t change their mind.

Other times it’s not so simple. You might not be able to sever ties with elderly parents or exes with whom you have to coparent.

In that case  it becomes more an issue of boundaries than of complete cancellation.

But creating and maintaining boundaries are two different things. And ADHD women tend to be people pleasers and perfectionists, which leads us to more shrinking.

You don’t really want to cut everyone out. I have an uncle who did that, and I’m pretty sure he has been living alone in the same apartment with the same furniture since the late 70s. He has few social connections, and a really long beard.

I spotted him from afar at my grandmother’s funeral. He didn’t talk to anyone.  Not much to say to people you haven’t spoken to in 30 years.

When you cut everyone out, people WILL forget you exist.  I don’t know about you but one of my biggest fears in the world is being abandoned. It’s basically the opposite of being seen.

Everyone wants to be seen, even people like me who don’t want to be looked at.  But every time you are SEEN, you run the risk of hearing the sighs.

ADHD women are often hiding in their lives.  We don’t say what we think, we don’t ask for what we need and want.

Women who do ask are labeled, “demanding”. Which is another way of saying you’re too much, and you should shut up and be a good girl.

You could pretend to be really needy and helpless. People respond to that fake authenticity stuff, particularly on social media.

I’ve thought about trying it.

Maybe I can show how not enough I am, how unworthy I feel. Then people will think I am worthy and give me their attention. But I don’t want to manufacture vulnerability in order to be seen.

I want to feel worthy of attention and not beg for it.  And I want the same for you.

Our last  option is to look at all of this as a mindset issue.

I could start capitalizing on my life story – that I’m an abuse survivor and have discovered how to, “shift my mindset” around ADHD and offer to teach you.

I could tell people I’ll coach them so they get the RESULTS they want in their lives.

Mindset is used in ADHD marketing lingo these days to explain why we feel stuck in our lives.

While I agree that beliefs play a role, we need to acknowledge the brain-based differences that make it difficult for ADHD adults to show their full capabilities to the world.

And sometimes you need a therapist, NOT a coach.  Particularly if you’ve heard the sighs throughout your life and you need help working through that.

I say this as a person who runs group coaching programs.

There is life beyond fear of the sigh.

To expand, communicate, teach, learn… is WHO I AM.

Who I was born to be…before I heard all the sighs and started shrinking and trying to fix what’s wrong with me.

I’ve long known I’m capable of more, but putting it out there is challenging.

You aren’t alone if you’re struggling to be seen in this world.

And so… next time you’re about to sign up for a webinar dedicated to fixing or managing some aspect of your ADHD, ask yourself:

Do I really need to fix anything?

Or can I choose to ignore that sigh that tells me I’m not enough/too much as an act of defiance.

And follow it up with more acts of defiance.

That  sigh, the one popping into your subconscious every time you’re about to make your move, is leading not to some promised land where you’re no longer at risk of being criticized…

Because the parts of yourself you never claimed collapse against the walls of the shrunken space you thought was acceptable.

The world needs you. All of you.