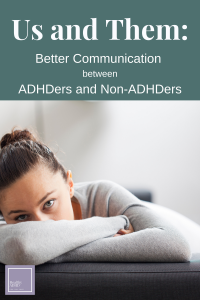 There’s a constant low level friction between us and them.

Them being people who do not have ADHD, or choose to believe that anyone with a brain-based difference can simply, “work harder” and everything will be fine.

Most of the people that expect us to work harder do so because they find our differences inconvenient. That’s a hard truth to swallow since so many of us already feel like a burden.

Those who doubt the existence of ADHD are often averse to mental health care in general, but that’s a rant for another day.

I have a story that really opened my eyes recently to the dynamic that exists between ADHDers and non-ADHDers. It is genuinely difficult sometimes to connect with people who don’t understand how we experience the world.

Last week I did something I haven’t done in months.

I took a shower while my son was on zoom school. Everything had gone so well the last couple months, I figured it was fine.

My son actually adjusted to online learning fairly well despite his dual diagnoses.

I was toweling myself off when I heard my husband almost, but not quite, shouting at my son.

I can’t help you if you don’t communicate with me.

(Seriously?! I can’t take a shower without everything going to sh-t?!)

So I walk out dripping into the kitchen to find my son crying and my husband with his arms crossed.

What is going on?!

The screen is black and I can’t see anything Mr H is doing.

So..can you hear what he is saying?

Ok leave the zoom and go back in. <reaching over and doing it myself>

After I dried my hair and my husband returned to his office, I asked E to explain why he checked out of class and started crying instead of trying the zoom again. At first, he said he didn’t know what to do, that he had messaged the teacher but not gotten a response.

Do you remember what you were thinking?

The zoom isn’t working. I don’t know what to do. And Dad is mad at me.

What did that feel like when you thought Dad was mad?

It was a death spiral lockdown.

Is that what we’re calling it?

Yeah. Dad doesn’t understand when I’m upset. (then I got a hug)

I realized my husband hadn’t been able to connect with my son’s experience of that moment. All he saw was the behavior.

To my husband it appeared our son was refusing to communicate. He was actually in the middle of a (semi) typical ADHD meltdown.

Having a meltdown is a little like being underwater. Everything is muffled and you’re not able to process incoming stimuli and respond appropriately. You can barely breathe.

Your thoughts are fragmented and unclear. You can’t feel the ground under your feet. The emotions are under your skin pressing to come out but you don’t know what will happen if you open your mouth.

Meltdowns are a fairly common occurrence. ADHD brains don’t have great self-talk to get us through stressful situations.

Other people, no matter how much they love us, can’t always empathize with the ADHD experience.

Many of the women I work with describe situations where a partner makes a statement that we are unable to interpret. Something like, “the kitchen is a mess.”

We aren’t sure if the person is angry at us, offering to help, or just thinking out loud.

We respond impulsively, or not at all, and that behavior is interpreted by the other party as rude or immature. In the workplace a lack of response is considered unprofessional.

When we descend into uncertainty, some of us cry, some of us rage, but however it shows up it looks like a hot mess to someone who has never experienced a, “death spiral lockdown” of their own brain.

All they see is our behavior, filtered through a neurotypical lens.

This is the fundamental problem between US and THEM. The lack of understanding results in negative interpretations of our behavior.

After one of these meltdowns you have to bring yourself back to a calm state, AND you have to find a way to practice damage control with the other humans.

Once your nervous system gets fired up it’s really hard to bring it back down. And when you do come down you feel physically and mentally exhausted.

After my son’s meltdown I asked him about canceling his drum lesson that afternoon. I knew he didn’t want to disappoint me. But I also knew intuitively his brain needed to rest from what had gone down.

You must learn to rest after a meltdown, even if your brain is telling you not to.

Later that day I explained to my husband that while he was trying to help, it actually made our son more overwhelmed. It was a good thing, because the Hubs didn’t understand why his suggestions made him cry.

Our son couldn’t put into words what he was feeling, and my husband misinterpreted the resulting meltdown behavior.

It’s a lot of work to communicate with the people in our lives who don’t have lived experience with ADHD. The neurotypicals need lessons.

Misinformation and negative stereotypes about neurodivergent brains persist because so many of us aren’t willing to have these uncomfortable conversations.

This is why*** there is an US and THEM dynamic with ADHD.

We live in a world where differences are not celebrated. Brain-based differences, as well as mental health challenges are generally invisible. Nobody can look at you at tell you have ADHD.

So it becomes important to tell our stories, and share our experience of the world. If we don’t, things will never change.

In the Enclave we’ve been discussing connection and why it’s so hard.

I have so many thoughts about how non-ADHD partners talk to US I could probably write a separate article on that. I’ll spare you. But I am curious…

..Have you experienced this Us and Them dynamic in your own life?