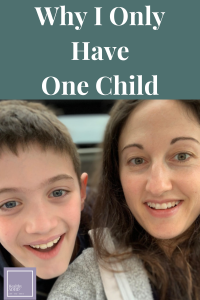 I cannot even tell you how many times I’ve been asked why I only have one child.

It started when he was just a couple months old with comments from one particular family member, and it continued for at least three or four years.

My son also has ADHD, and Aspergers syndrome. So we have a lot going on in our house.

Having only one child was and is the best decision for me, my husband, and our son.

Why I Only Have One Child

Anxiety and ADHD often go together, and having children adds another layer of things to ruminate over.

If you have children you know how much we obsess over every prenatal appointment and every ultrasound. If you are over age thirty you are tested out the whazoo for genetic issues, blood sugar issues, and fetal abnormalities.

For me the irrational fear started as soon as I saw the little blue line on the home pregnancy test. I had such a hard time getting and staying pregnant that I was willing to do just about anything to keep my little cluster of cells multiplying.

While pregnant you are exposed to a constant barrage of often conflicting information about what you should and shouldn’t do. It’s the perfect example of information overload, and most of the time your OBGYN will not want you to take your ADHD medications.

In fact, nobody will ask you how you are handling things emotionally while you are pregnant. They only ask after the baby comes when they screen you for postpartum depression.

In our culture, motherhood has been glorified and many of us feel like we cannot talk about how stressful and scary the whole pregnancy part of it is.

And you still have to give birth. My water broke at home at 10pm on a Sunday night. The first physician from my practice told me I could come in when I started to feel more pain.

The pain became pretty intense around 3 a.m. so I went to the hospital and was greeted by a nurse who was not in a fabulous mood. She was pretty rough checking my cervix and finally declared, “I can’t feel anything.”

Eventually the doctor checked and said my cervix was 4 cm dilated and totally normal. They started the IV and wrapped that monitor thing around my belly. They told me I could walk around if I wanted to.

When the doctors from my practice changed over, the new doctor wanted my labor to move faster so he started me on Pitocin. By this point I was at 6 cm but I had avoided the epidural.

My nurse told me that if I didn’t ask for it then they would likely tell me I waited too long. So I asked for the epidural. I had already read all of the conflicting information and stories expounding upon the virtues of a natural childbirth.

It took 2 tries to get the epidural. The first catheter leaked all over my bed and they said I had to wait ½ hour to prove it wasn’t working. Meanwhile I was gripping the side rail of my bed because the contractions had really picked up with the Pitocin.

The epidural eventually started to work, but then they said my baby’s heart rate was slowing down too much. At this point I wasn’t allowed to walk around anymore because they wanted to monitor his heart.

My c-section experience was the opposite of good.

My spinal block wore off as I was being closed, and I was left in a lot of pain. Pain bad enough that I had to be isolated and given a megadose of something that made me loopy.

After that pain pump my memory is a black hole. I have no idea what happened the first night of my child’s life, though I’m told I nursed.

During our five days in the hospital he screamed almost continuously. I was too sick to ask questions and assumed it would get better at home.

They came in and pressed on my uterus all the time, and peeled some of my skin off of my incision due to an allergic reaction to the tape.

I got a hospital infection. It was not the sort of beautiful bonding time I envisioned.

Now, I know there are women who have had horrific, traumatizing experiences that make mine seem like a walk in the park. But I’ve never been in a hurry to repeat the experience. Here I am with my 6.5lb baby. This was like 3 hours after his birth before he started screaming.

I struggled to get pregnant, but once I did I realized I didn’t like it very much.

You do get a new sense of respect for your physical being. It’s amazing to consider your body can produce a healthy, fully-formed human being. The sense of gratitude for that ability is something I’ve not experienced before or since.

You never realize how powerful and strong you really are until you give birth.

You might even start taking better care of yourself.

But having a baby isn’t just about you.

My husband is nearly twelve years older than I.  The only thing that gives him away are the grays in his facial hair, so most people are shocked when they find out.

The Hubs will be sixty one years old when our son graduates from high school. If I decided to have another baby my poor husband would never be able to retire.

I love what I do for a living, but it doesn’t support our family.

My son has some advantages as an only child in the sense that he has the opportunity to experience activities and educational opportunities that cost money.

If we had another child I doubt I could pay for things like travel, or Brazilian jujitsu.

I’m so grateful that we are able to provide these opportunities and it doesn’t feel like a sacrifice.

I wrote an article for Huffington Post about my epic failure as a stay-at-home mother. http://www.huffingtonpost.com/liz-lewis/i-hated-being-a-stay-at-home-mom_b_8683406.html

The first few weeks of having an infant are rough.  If you disagree then you must have had easy babies.

My son screamed incessantly and nursed around the clock. He had very obvious sensory issues almost immediately from birth which none of the pediatricians took seriously because he was physically healthy.

I was sleep deprived, and lack of sleep always makes ADHD symptoms worse. This was about a week after we came home. Notice all of the crap spread out around me. That is because I rarely left my bedroom so that I could whip out a boob at a moments notice.  Also notice my son is screaming in this picture.

Speaking of nursing, it’s hard.  Waaay harder than they made it sound at the class I took before he was born.  He nursed every two hours, then he might sleep for like 20 minutes on top of me, and then he would eat again.

You know how sometimes you just hit a wall?

You cannot absorb the needs of other people another second and you are ready to get in your car and drive away from your life.

That’s where I was when my son was about three months old, as I sat in dirty clothes on top of my bed. I contemplated calling my husband at work to tell him he had to come home because I was leaving him and the baby and never coming back.

I knew needed help to manage my ADHD, and my emotions, but I was unable to get the help in the moment. I’d been ignoring it for too long.

I don’t ever want to feel that out of control again.

I’m treating the ADHD, but the emotional dysregulation of ADHD makes parenting extra difficult for me.

As I’ve mentioned my son has Aspergers and ADHD.  Everyday situations are much harder than they should be and I’m dealing with the reality of that all the time.

In quieter moments he sometimes tells me he wants a baby brother.  In fact he said this again just this morning.  For a fleeting second I felt sad. Then I remember that the his diagnoses occupy 100% of my mental and emotional space.

Yes I am hyperfocusing, as I am prone to do.

The truth is this: I cannot mentally and emotionally handle another child.

I love my son. If something happened to him I have no idea if I could survive it, but having another child doesn’t take away the fear of losing him.

Sometimes I feel sad that I didn’t enjoy his infancy more. I wish could remember more of the details of his first years.

But you have to know your limits, and I know mine.

Every family has to make reproductive decisions that work for them. There shouldn’t be questions and judgment around that.

A mother of one child is just as qualified as a mother of five children.

I only have one child, and this was the best choice for me, my husband, and our son.

I welcome your stories of becoming a mother!

In our community, you will experience change, growth, and healing.

You will explore your emotions and how to manage them.

And you will form a more whole, integrated vision of yourself and your place in the world.

4 comments on “Why I Only Have One Child”