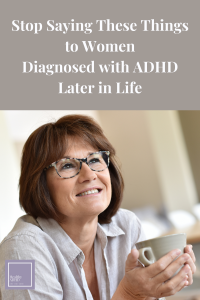 I know that’s a long title, but women diagnosed with ADHD later in life are weary.

Whether you self-diagnosed or jumped through all the hoops of the healthcare system, you are crawling across the finish line after running a marathon you never wanted to run, most likely after a series of unpleasant or life altering experiences.

“Later in life” includes diagnosis after having children, living through a pandemic, and anyone who hit rock bottom through chance or circumstance.

Talking about your new diagnosis brings a range of responses, from curious to totally dismissive. Being told to “try harder” or “buy a planner” feels totally invalidating.

These responses aren’t helpful and some are downright damaging.

More of us are opening up about our experiences in private settings like the Enclave, and also publicly on everything from TikTok to massive Facebook groups.

People are talking about ADHD women more than ever and this is a good thing.

But in order to move the conversation forward we need to dislodge some of our notions about women, motherhood, gender, and even work and replace them with more empathetic and inclusive ideas.

“you’ve got a great job/home/family”

This is big. If you’ve spent years of your life overworking yourself and covering up your symptoms new requests for support and understanding are often rebuffed.

People don’t like it when we change. And finding out you have ADHD often results in taking inventory of your entire life. This is includes how you managed practical life tasks, money, work, and potentially relationships.

If someone you love tells you they need support, don’t ask why. Ask what kind of help. Just because you can’t see the struggle doesn’t mean it’s not real.

I can’t tell you how many times this is used against adult women when they try to talk about ADHD. As if a little girl who did ok and didn’t make any waves must grow up to be an adult woman who will move through life effortlessly.

Who you were at ten, has very little correlation to who you will be at forty with a mortgage, a student loan payment, a family, and a career.

Don’t tell an adult that her diagnosis isn’t valid because she was a good kid.

“You graduated from college/grad school”

Alternatively, “but you’re so smart.”

This one really burns my butt. Many women can perform in an academic setting. Usually through overworking and rigid systems and other compensatory strategies they’ve created. The smarter you are the more systems you’ve probably developed.

There’s no grading system for the challenges life throws at you but you’re still judged harshly on your ability to adapt.

ADHD shows up at different times and in different contexts throughout the lifespan. As your life expands and circumstances change the demands on your EFs increase. It’s often during trying times that symptoms become more obvious.

Don’t give someone a backhanded compliment about their intelligence while undermining this new knowledge of themselves.

“This is what a woman/mother does”

A lot of what inconveniences people about ADHD women is actually related to gender expectations. So when someone says “everybody else is doing it” you immediately assume there is something wrong with YOU.

Women are expected to enjoy things like homemaking, decorating and childcare. If you don’t enjoy these things, or you don’t meet these expectations people make a lot of assumptions.

“Her home/workspace is a mess!”

Nobody ever stops to consider there could be a brain-based difference for your struggle. I mean all women are the SAME right? We’re a monolith.

Do not tell her that she should try harder to be like other women.

“We didn’t know about this stuff back then”

Many women find out after adult diagnosis that they were tested in school for a disability, or that their parents knew about their ADHD and had chosen not to treat it because they didn’t think it was real.

By the time they talk to me they are very angry at their parents, teachers, or others in their lives who never intervened to help them. Generally these misguided but well-meaning folks respond with some version of, “we didn’t think it needed treatment.”

PLEASE don’t make excuses. Apologize. She might still be angry, but at least you aren’t dismissing what’s happening now.

“You’re using ADHD as an excuse”

This one is most often deployed when you are making changes in your life, or when you have lowered capacity. A major life transition can trigger increased symptoms for you, and then irritate people in your orbit.

There is a before and after with ADHD diagnosis.

When you start seeing ADHD in your life you cannot unsee it, and from the outside this can look like you’re making excuses for past, present and future.

What you’re actually doing is putting together a 1000 piece puzzle and seeing the full picture for the first time ever. It’s gratifying but also a little sad. Mixed emotions are hard to process.

Telling someone they’re using ADHD as an excuse creates separation, the opposite of connection. Just don’t do it.

Quick Summary of what not to say:

Women diagnosed with ADHD later in life are carrying around a lot emotionally.

Their self-esteem has been battered and their self-trust is in the crapper. As this new information is absorbed and integrated into their sense of self they’re being forced to think about every major decision they’ve ever made.

It’s like watching an old VHS tape rewind on the screen in front of you, except it’s your life and you’re applying a very unflattering filter.

The process of teasing out the YOU from the ADHD is very, very difficult. When the people in your life don’t acknowledge this life-altering discovery it’s devastating.

So please, listen with an open mind and open heart if someone shares their ADHD story with you.

Don’t deny their experience, or talk them out of their feelings. Rehashing past mistakes or expecting immediate behavioral changes is also not helpful.

Pursuing a diagnosis and learning about ADHD is proof they are working on change.

Honor their experience by listening to them. Grant them the curiosity and compassion they struggle to give themselves.

Life with ADHD is not just about managing symptoms. It’s about how it shows up in every area of our lives, and how the world responds to us. So much of the time the response is irritation and annoyance.