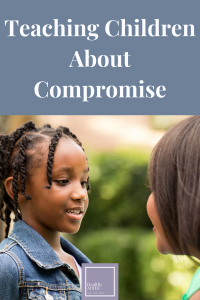 Teaching children about compromise is more important now than ever.

You and I are at home trying to wear all the hats. We are mothers, partners, parents, teachers, and community organizers. Soon we will be camp directors for the summer.

I don’t know about you, but my ability to manage conflict has decreased in the past couple months. So lets review what the word compromise means, and why we need to teach it directly to our children. And perhaps ourselves.

By definition, compromise is to settle a dispute by mutual concession.

We live in a world of 24/7 dispute. On the news, on television, and most definitely on social media.

You’ve probably also heard about the importance of empathy.

Most of us know we need to care about the feelings and wishes of others. Or we at least need to try to imagine, “walking in their shoes.”

My son has ADHD but also has a form of Autism doctors refer to as Aspergers. As most of us know, Autism appears on a spectrum, so it affects everyone who has it differently.

My son struggles with emotional regulation. He is unable to see any other viewpoint but his own.  There is good and bad, black and white, and never any grey.

And Edawg loves to argue. He is like a shark that smells blood, if he senses weakness, he moves in for the kill.

I cannot stand arguing. There’ve been times when I had to give up and walk away for a minute to manage my frustration.

So I’ve learned a lot about the art of compromise here in my own house. You could also explain that when you compromise you are avoiding a conflict.

My son enjoys conflict, but not all children do. Some children will be willing to compromise to avoid the emotional overload of arguing.

Show them compromise in action

Use lots of examples to demonstrate compromise.

When my son was little, I told him if he ate four pieces of broccoli, he could have a cookie after dinner.

Now that he is older, I trade a few extra minutes of game time for reading a chapter in one of his books. He’s getting what he wants, and mom feels like his brain isn’t melting.

Years ago, I asked my son what he could do for me that he thought would make me happy.

Little dude volunteered to brush his teeth by himself.  I said ok, and I offered to give him privacy in the bathroom. (Knowing full well that there would be toothpaste smeared everywhere.)

After he brushed I said, “Look we both gave a little something.”

Adults can also model compromise in small ways every day.

Sometimes the Hubs and I will disagree on what to do for an afternoon. If I want to be alone and he wants to socialize, we compromise. He takes E and runs errands, while I get to be alone.

When they return, he goes to hang out with our neighbor for a while.

Over time, my son has begun to see that giving a little doesn’t mean he is losing. If anything, he is sealing his connection to others instead of pushing them away.

You can find countless opportunities to model compromise if you’re looking.

You need to talk about other people’s feelings constantly. In movies, with friends, everywhere.

You might not need to use the word empathy, but you need to talk about feelings.

Younger children are still learning how to manage their own emotions, so even if they notice the feelings of others they don’t always know how to respond.

In my case, my son notices the feelings of others but is so wrapped up in his own thoughts he doesn’t respond appropriately.

This is part of his High Functioning Autism. But for some children it is simply a matter of age and social-emotional development.

When my son says something unkind to a friend or teacher (which happens semi-frequently) I always force him to put himself in that person’s shoes. I ask very specific questions using his own behaviors and words.

I ask, “how would you feel if Johnny stopped talked to you and walked away without explaining why?”

Then we talk about it. Sometimes for an extended period of time.

Empathy is tough to teach and we cannot expect it to happen overnight.

The more up-front we are about our feelings, the more likely our children will be to model that same behavior. Source

E recently told me that he compromised with his friend when he, “got tired of him asking me the same question over and over.”  In the past he would have glared at him and walked into the house without explanation. This time he explained to his friend that he was tired of the question.

While I cannot picture how that conversation went, I am pleased that he made the association between compromise and conflict resolution.

I told him how  proud I was of his actions and how far he has come.

I have every confidence that my ADHD, Aspie nine year-old wild man will grow up to be a kind and decent human being.

Teaching your children communication skills is never a waste of time.

As parents, we all want our children to develop appropriate social skills. Moms with ADHD often have their own struggles to fit in and feel like we are doing enough.

Teaching children about compromise and empathy is more important than ever.

They certainly aren’t going to learn these important interpersonal skills on social media. 🙂

I bring together brilliant ADHD women to manage our emotions, tell our stories, and create change, so that we can have calmer, more satisfying lives.